Ryan Leaf joined us Monday, April 23, 2018 from 2 – 3 p.m. in the Ferguson Student Center Great Hall as part of our Guest Speaker Series. Ryan Leaf shared his personal story regarding substance use and finding humility due to the consequences of his use. Ryan Leaf is a former college and NFL star quarterback. Today he is a behavioral health advocate and ESPN Commentator 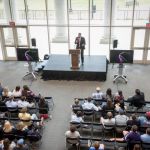 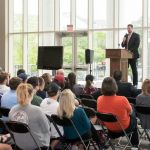 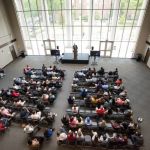 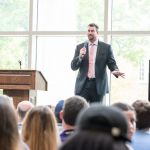 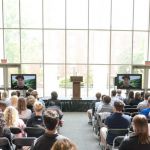 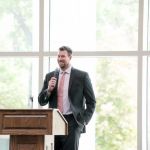 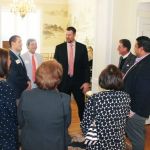 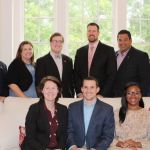 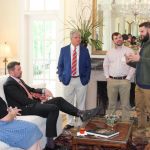 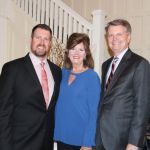 Ryan David Leaf is an advocate for those struggling with mental and behavioral health issues and encourages audiences to transform the way we think about mental health issues and addiction. Ryan works to eliminate the mental health stigma and says, “asking for help is a sign of strength, not weakness.” The strong presence Ryan holds in a room is not just due to his 6-foot-6 frame, but the impassioned commitment he has made to serve those who are struggling. Before working with Transcend Recovery Community, he was one of the most promising collegiate football players of his time, and rivaled Peyton Manning for the Heisman trophy. In 1998, he was the number 2 pick in the NFL draft behind Peyton Manning. Ryan now travels across the United States speaking to communities about his story of recovery. Ryan’s experience captures the transparency and authenticity that Transcend Recovery Community is founded upon.

Football was Leaf’s life, but the pressure to perform on such an elite level was more than he was prepared to deal with, ultimately leading to the demise of his professional football career. After his official retirement from the NFL in 2003, Ryan received his bachelor’s degree and took a coaching job with the West Texas A&M football team in 2006. However, Leaf still struggled with his mental health and began to abuse prescription opiates due to a previous football injury. He solicited pain medication from West Texas A&M football players and eventually was caught stealing from the home of one of his players in order to feed his addiction, resulting in termination. His personal problems began to mount and Ryan was given the opportunity to seek help.

He received help for his substance abuse in Canada in 2008, but later he returned home to face criminal charges. He eventually relapsed on prescription drugs in 2010 since he was not able to develop a strong recovery community. He entered drug treatment again in January of 2011 in Montana. Although it seemed Leaf’s struggles were behind him, in May of 2011, doctors found a mass in Ryan’s brain. He eventually relapsed due to the emotional drain of surgery, and by 2012, he was breaking into people’s homes to feed his addiction once again. Prison followed soon after, and when Ryan first entered prison, he had no motivation. However, his cellmate changed that as he urged Leaf to use his prison time as an opportunity to accomplish something of greater importance. Leaf describes the time in prison as a time of “spiritual growth and humility.”

Today, Ryan Leaf is the voice for the recovery community. His mission is to reach anyone in need of hope. At one time, Ryan felt completely consumed by his mental health issues and the only way to pacify his pain was with drugs. Out of that desolation, he hopes to inspire others to begin their road to recovery to see that happiness and health can always be achieved. He chooses to share his story dealing with mental health issues and substance abuse in order to reach the person who cannot yet imagine a better life for themselves. Ryan’s wish is to be an example that a better life is always possible.

Ryan is also a strong advocate for military service men and women. His father is a veteran and works with the foundation Merging Vets & Players (MVP), an organization comprised of a blend of combat veterans, players, coaches, and mentors, who understand what it means to overcome adversity, and who rise to face every challenge affecting the veteran community.